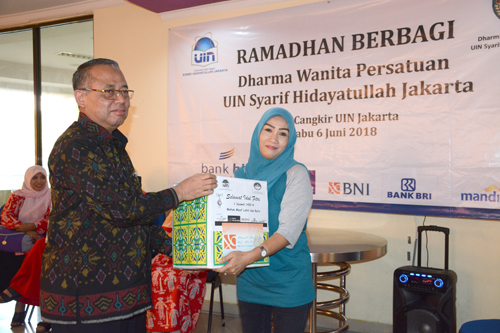 Café Cangkir, UIN NEWS Online   – On the event of Idul Fitri 1439 H, the Dharma Wanita Persatuan (DWP) UIN Jakarta distributed at least 830 Eid gifts to the second and honorary employees. The distribution of the parcel was symbolically handed over by Rector Dede Rosyada to one of the honorary employees at Kafe Cangkir on Wednesday (06/06/2018).

The distribution of Lebaran gifts routinely held  by DWP UIN Jakarta every day before Idul Fitri. Gifts given in the form of some basic commodities, such as rice, oil, wheat, and beverages.

“This sharing is routinely held. The goal is to share happiness with the employees of UIN Jakarta who will celebrate Lebaran, ” she said.

Andriyani further explained, the distribution of Eid package is one of the charity activities DWP UIN Jakarta in the month of Ramadan. Besides in the form of social charity, DWP UIN Jakarta during Ramadan also holds recitation and routine study.

“We also hold a joint assessment and study dluha about gender fikh,” he said.

Meanwhile, Rector Dede Rosyada in his speech expressed his gratitude to all parties who have initiated a charity event in Ramadan, especially to DWP UIN Jakarta and the partners of the companies that work together.

According to Dede, sharing happiness is highly recommended in religion, because happiness is a common property. So, someone will be happy if others also feel the happiness. (usa-rs)