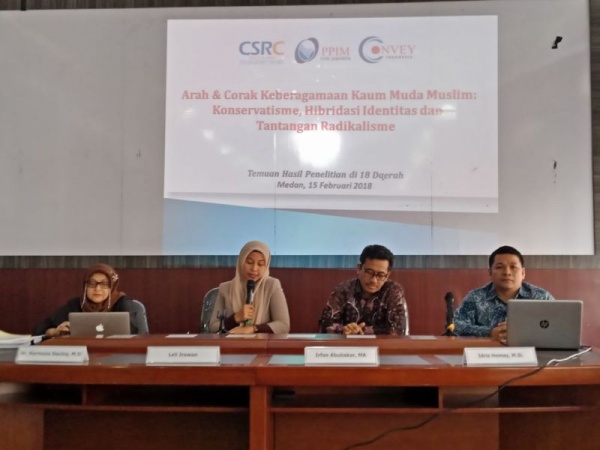 This was conveyed by CSRC Director of UIN Jakarta, Irfan Abubakar, MA in his office. According to Irfan, this activity is a seminar on the research of Direction and pattern of Muslim Youth Diversity from CSRC UIN Jakarta together with MU Convey the Center for the Study of Islam and Society (PPIM) and the United Nations Development Program (UNDP).

In particular, Idris Hemay MSi conveyed his explanation about the diversity of Muslim youth in Medan based on his research results. While Irfan Abubakar, MA provides an overview of the direction of the diversity of Muslim youth in 18 cities throughout Indonesia. Meanwhile, Dr. Harmona Daulay provides a critical analysis of the results of research ranging from discussion of concepts, methods and research results.

Among the findings of this study, it is generally shown that attitudes and behavior of Muslim youth against radicalism do not indicate a steady inclination. But, as described above, it can be claimed here that the educated young generation of millennial Muslims tends to embrace conservative religious attitudes and behaviors, with their communal, scriptural, and puritanical features. Nevertheless, the basic attitudes of the millennial generation are open to moderate religious values ​​and principles, with a considerable appreciation of individual freedom and human rights, albeit limited by religious and cultural norms. Such attitudes are also reflected in how they communicate their social relationships with different social groups.

It is likely that such religious features and identities reflects the process of learning, understanding, and religious experiences that are influenced by complex religious, cultural and socio-political contexts. The identity hybridization, as described above, seems to have a powerful effect on the process of forming these views, attitudes and behaviors.

The breadth and complexity of the problems faced by Muslim Millenials makes them conservative in religious trends, especially for those still in high school and college. Their limited reach of knowledge, as well as ongoing search processes, make them more likely to be compelled to follow normative views when presented with sensitive issues such as diversity and tolerance, individual freedom and human rights, national insight and Radicalism and Extremism.

The event was officially opened by the Dean of FISIP USU Dr Muryanto Amin MSi, and attended by more than 100 participants consisting of various circles such as officials in FISIP USU, faculty members from lecturers, students, religious teachers, pesantren, journalists, NGOs, and various other elements. (usa)