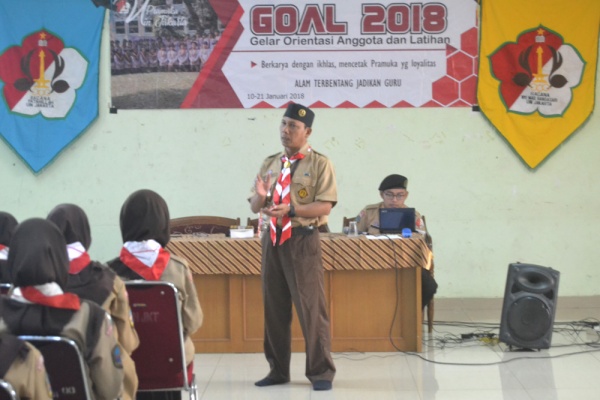 Madya Hall, NEWS UIN Online – The head of UIN Jakarta Scout Movement Nanang Syaikhu said, the campus scouts must be agents of change of society. Therefore, college-based scouts have distinctive characteristics that are different from community or territorial scouts. One of those traits is its community-oriented activity through its intellectual ability.

“Campus scouts are not synonymous with singing and clapping. Scout campus is a community solver problem and as a driver of development, “he said when delivering the material on Orientation and Field Member (GOAL) for new members of Randana Pandega Division of Scout Movement of UIN Jakarta in Hall of Madya, Thursday (11/1/2018).

Nanang asserted, the role and function of the campus scout is actually very complex. He is not merely as agent and pioneer of change for the society but also prepared as a candidate for the builder and cadre of Scout Movement.

The position of the campus scout is also very strategic for the development and improvement of scouting education quality in the country. Through reason and intellectual ability, college college student scouts can give birth to new innovative works that people need today. It is in accordance with the mission of tri dharma college, namely education and teaching, research, and community service.

“The mission is also in accordance with the concept of tri bina in scouting education, namely self-improvement (improving skills), unit building (managing cadres of scout units), and community development (berbuhakti to the community),” said Nanang who delivered material about ” High”.

On the other hand, he also appealed to the campus scouts, especially new members, in order to play the maximum role during the scouting education process on campus. In other words, the college scouts should not be a burden on the community but rather seek solutions to build a society, especially in lagging areas.

The role of college scouts must be realized in the form of real dedication, such as being a volunteer or actively doing research and developing appropriate technology in society.

“Once again, this is the hallmark of the campus scouts, becoming agents and motivators or mobilizers of society, both in urban and rural areas,” said Nanang. (usa)