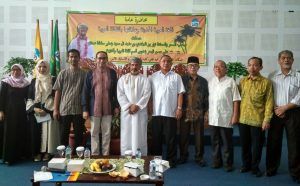 According to Husni, this activity is more obligatory for students of BSA and Tarjamah UIN Jakarta. “The goal was to give insight into the influence of modern Arabic on the development of Arab culture. Because they are studying in the region, “he said.

In his speech, Farhan expressed his gratitude to Sayyid Nazar and entourage from ‘Amman has pleased to fill International Lecture at FAH UIN Jakarta. “It is a pride we all can learn and exchange ideas with other countries to develop Arabic,” he said.

On this occasion, Sayyid Nazar revealed that Arabic is also the language of Science, especially classical Islamic scholarship. “Hundreds of thousands of books from different disciplines of our ancestral heritage use Arabic. Another feature of Arabic, compared to other languages ​​of the world, is a strong bond with religion. Because the holy book of Islam is derived in Arabic, “he explained.

At the same time, direct field report of UIN NEWS Online team reported that the students of FAH UIN Jakarta are very enthusiastic about following this Public Lecture. According to Fadli Yuliansyah as BSA 5th semester student, this activity is very motivating students of BSA and Tarjamah – especially – to develop Arabic language in this modern era and make Arabic is the language of civilization and language of the world. “I hope it can be used not only in Muslim majority countries. Hopefully, “he added. (usa)