Statement of UIN Jakarta on Harmony in Indonesia 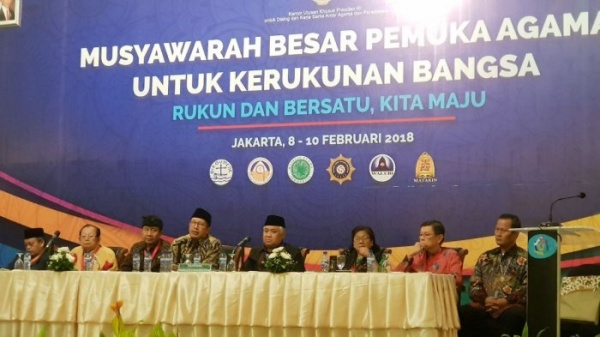 Rectorate, UIN NEWS Online – Rector of UIN Jakarta Prof. Dr. Dede Rosyada MA was invited to attend the Musyawarah Besar Pemuka Agama Untuk Kerukunan Bangsa 2018 (Discussion of Religious Leaders for Harmony 2018) at Grand Sahid Jaya Hotel, Jakarta, Thursday-Saturday 8-10 February 2018. This event was held to gather any inputs from all religious leaders related to the current condition and in the future. The event was opened by the Presidential envoy for Interreligious Dialogue and Cooperation Dr. Din Syamsudin MA.

Responding to the issue of religious harmony in Indonesia, Rector of UIN Jakarta along with a number of academicians formulated some statements of UIN Syarif Hidayatullah Jakarta. The academicians, Professor of the Faculty of Ushuluddin Prof. Dr. Zainun Kamal MA, Lecturer of Tafsir Dr. KH. Abdul Moqsith Ghazali MA, Lecturer of Religious Studies Ismatu Rofi Ph.D, Lecturer from the Faculty of Adab and Humanities Dr. Irfan Abu Bakar MA, and Lecturer from Faculty of Da’wah and Communication Sciences Helmi Hidayat M.Sc.

Below are statements of UIN Syarif Hidayatullah Jakarta regarding Religious Harmony in Indonesia:

Various issues of the nation rooted in the diversity of Indonesian society, ranging from differences in ethnicity, race, class and religion. It requires contribution from all elements of the nation to reduce every friction that is very likely sticking out due to the difference. President Joko Widodo’s policy to establish the Presidential Work Unit for Interreligious Dialogue, Cooperation and Civilization must be positively welcomed by all parties. State Islamic University (UIN) Syarif Hidayatullah Jakarta is at the forefront of positively welcoming the establishment of this presidential working unit.

UIN Syarif Hidayatullah Jakarta also responded positively to the “Musyawarah Besar Pemuka Agama Untuk Kerukunan Bangsa 2018” at Hotel Syahid Jaya, Jakarta, 8 – 11 February 2018, organized by Presidential Work Unit for Interreligious Dialogue, Cooperation and Civilization led by Prof. Dr. Din Syamsuddin. In this context, as an higher education institution, UIN Syarif Hidayatullah Jakarta feels the need to create a standing position concerning seven major themes that often included  in many diversity issues of Indonesia: 1) Views and attitudes of religions about the Unitary State of the Republic of Indonesia (NKRI ) based on Pancasila: 2) Views and attitudes of the faithful on the concept of Unity in Diversity; 3) Views and attitudes of the religious people about the legitimate government of democratic election results based on the constitution; 4) Principles of harmony among religious followers; 5) ethics of inter-community harmony; 6) Religious broadcast and the construction of houses of worship; and, 7) Recommendations on non-religious factors that interfere with interfaith harmony.

First, the formation of the Unitary State of the Republic of Indonesia (NKRI) based on Pancasila, UIN Syarif Hidayatullah Jakarta on behalf of and as the academic center argues that the form of state of NKRI based on Pancasila is final. This scholarly institution continues to appreciate the idea of ​​the nation founding fathers who have agreed that the form of the Indonesian state is unity; because the population of Indonesia is diverse in terms of ethnicity, religion, race and intergroup, the Pancasila that accommodates diversity is considered suitable to be the foundation of this country. This scientific attitude is reinforced by one of the qualitative and quantitative researches about the style and direction of Indonesian Muslim youth diversity that has just been done in 18 cities across Indonesia by one of UIN Syarif Hidayatullah Jakarta research institute. The research concludes that young Indonesian Muslim respondents positively commented on the state of the Unitary State of the Republic of Indonesia, Pancasila as the basis of the state, the 1945 Constitution, and the principles of Bhineka Tunggal Ika (Unity in Diversity). Normatively, the survey results indicate an above average rate of 85%, with which it can be concluded that Indonesian Muslim youth accept the existence of four pillars of nationality and state held by the Republic of Indonesia.

Secondly, the survey does show that there are a small number of Muslim youth who are identified as radical or even extremist, but they are in the enclaves or organizations that BNPT has identified as radical, including the Hizbut Tahrir Indonesia (HTI) organization. In spite of their small numbers, they are not without influence and therefore still have to be the focus of attention and study of scholarship especially related to the study of harmony among religious followers. Referring to the Wahid Foundation research, UIN Syarif Hidayatullah Jakarta reminded that the number of radical groups now reach 11% of the total population of Indonesia or equivalent to 600,000 people. They are indicated to have been involved in radical acts. That number is outside the 11 million people suspected of being ready for radical action.

Fifth, UIN Syarif Hidayatullah Jakarta appreciates the principles of harmony between religious believers who have been running all the components of the nation in order to avoid friction that may harm all religious people in Indonesia. The higher education institute is currently in and continues to conduct scientific research to find new formulas around the principles of harmony among religious believers to be more ideal.

Sixth, Regarding the ethics of interfaith harmony, UIN Syarif Hidayatullah Jakarta waited patiently and will respect the ”Ethics and Guidelines of Interfaith Life” which is now being drafted by the Majelis Ulama Indonesia (MUI).

Seventh, in order to avoid friction and / or arouse suspicion among religious people, UIN Syarif Hidayatullah Jakarta asks all parties to respect the Letter of Agreement between Ministry of Religious Affairs and Ministry of Home Affairs which contains the agreement about the house of worship establishment. By referring to the letter of agreement, we can maintain the harmony and suspicion among the nation’s peers can be avoided. These guidelines should be immediately made and socialized to as many people as possible so as not to arise among religious believers.

Eighth, along with this event, UIN Syarif Hidayatullah Jakarta gives the following recommendations: