ASN’s are encouraged to attend the 74th RI anniversary ceremony 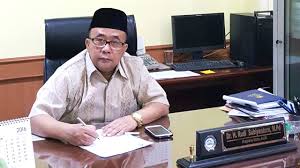 Academic buildings, UIN News Online – All State Civil Apparatuses (ASN), especially civil servants (PNS) at UIN Jakarta are encouraged to attend the commemoration ceremony of the 74th Republic of Indonesia Independence Day on August 17, 2019. The ASNs are also required to fill in the attendance list provided by their work units.

This was said by AUK Bureau Chief of UIN Jakarta Rudi Subiyantoro to UIN News Online at the Academic Building, campus I of UIN Jakarta, Friday (08/16/2019).

“As an ASN, we are obliged to attend the ceremony (Independence Day). Therefore, I urge all ASNs can present to commemorate it,” he said.

According to Rudi, Indonesia’s Independence Day is a historic day for the Indonesian people. In addition to being commemorated nationally at the State Palace, in each government institution, including educational institutions.

“Therefore, we must celebrate it solemnly through the flag raising ceremony,” said Rudi.

The commemoration ceremony of the 74th Indonesian Independence Day at UIN Jakarta will be held at the Center Building field on August 17, 2019 at 06.00 WIB with the main event raising the red and white flag. The ceremony will be led by the Rector of UIN Jakarta Amany Lubis, while the ceremony officials will be held by several deans and student activity units (UKM).

After the flag-raising ceremony was over, it would be continued with the informal meeting of the entire UIN Jakarta academic community. (usa/lrf)