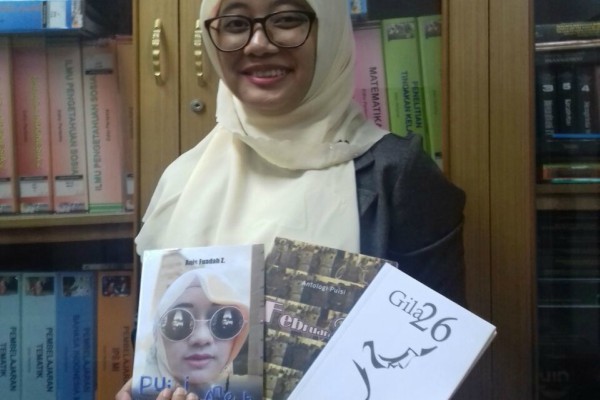 Therefore, the woman born in Blitar, East Java, must write even one or two verses of poetry. “I have a target to write a poem a day at least 10 titles,” she said.

It is said, during writing the poem, Anis (her nick name, Ed) has no specific theme. It means that he writes whatever is in her mind and soul. However, almost all of the poems she wrapped are self-reflection of the reality of life she faces. She talks about nature, about God, about man, and even about love.

Persian adulterer Sufi poet, Maulana Jalaluddin Rumi, revealed that to write poetry doesn’t have to be in special time. He writes sometimes on the street, on campus, at home, even in quiet places. In principle, wherever there is an empty space, there too he will devote all his anxiety to write.

For Anis, poetry is her true friend. There is no friend to talk to except the poem itself. Poetry has also become an odyssey of her soul, both in times of joy and sorrow. Without the poetry the world seemed to be dry and meaningless. Moreover, the poem for Anis is like the lover, who is not just about love or taste, but also despair. Poetry is not merely talking about the beauty of the universe but also the human chaos that inhabit it.

For years Anis was self-contempt. Understand what exactly happens with life. From there, she then expresses her whole inner turmoil only through poetry. He seems lazy to speak. And poetry is the single most effective means of communication to express its inner turmoil.

“It’s hard for me to share with others, unless I write it through poetry. That’s the easiest way to talk, ” she said.

Since then, Anis tried to gather from all the works she made. After quite a bit, she then published in an anthology of poetry.

Now, there are at least three books of anthology of poetry by Anis published by publisher Bening Pustaka, Yogyakarta. The three titles of the anthology book of poetry are Gila 26 (2016), Strange Poetry (2017), and February 28 (2018).

“I am now re-composing poetry and preparing for the fourth anthology poem book,” said the novels hunter.

According to Anis, her career as a lecturer and civil servant (PNS) did not make her have to get stuck in a routine that handcuffs her “wild” imagination. Because in her mind, she wanted to consistently write poetry in the midst of her busy schedule.

“When it comes to leisure time, that’s where I play my fingers and start scratching the words,” she said in a poetic tone.

Anis Fuadah Z was born in Blitar on June 6, 1988. She graduated from PGMI major in Diponegoro Islamic Higher Education, Tulung Agung, East Java, in 2015. After that she continued her master at UIN Malang study in the same department year 2013.

Since 2015 until now, the woman who likes durian and dukuh are permanent lecturers at PGMI FITK UIN Jakarta. In 2017, she married Dr. Badrus Sholeh, a lecturer at the Faculty of Social and Political Science and Executive Director of the Center for Middle Eastern Studies and Global Peace UIN Jakarta. (usa-rs)