AM Fatwa Passes Away 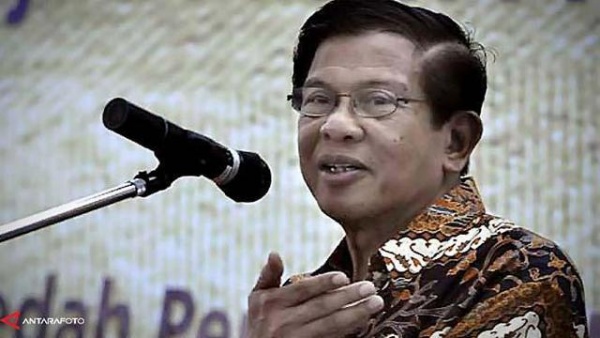 The news of the death of AM Fatwa itself directly delivered his daughter, Dian Islamiaty Fatwa, as quoted by various media, Thursday (14/12/2017). “My father AM Fatwa had passed away at 06.25 WIB at MMC Hospital. Please open the door of forgiveness and hopefully Dad gets the best place in Allah SWT, “said Dian.

Dian said, the deceased Fatwa died after being treated for some time due to illness he suffered. After being laid by the Regional Representative Council (DPD) of RI, everyday before death, the deceased was buried with a military ceremony at the Veteran Cemetery, Kalibata, South Jakarta, considering that the deceased was the recipient of the Bintang Mahaputra Adipradana in the era of President Susilo Bambang Yudhoyono.

The death of Fatwa undoubtedly leaves a deep sense of loss for local national figures, political parties, bureaucracies, including campus academics who have been colleagues, cadres and students. Rector of UIN Jakarta, Prof. Dr. Dede Rosyada MA, for example, claimed the death of Fatwa is a big loss civitas academy UIN Jakarta.

“AM Fatwa is a Ciputat intellectual figure who directly acts as an activist with undeniable integrity. Most of his life is filled with opposition to various forms of injustice, although he himself must bear the risks. Therefore, the deceased is a very decent exemplary figure,” he said.

Member of IKALUIN who is now a Member of Parliament from Golkar Faction, Dr. TB Ace Hasan Syadzili also claimed the loss of Fatwa’s death. “We are very sorry for the death of Dr. (HC) AM Fatwa. He is a warrior politician who is very consistent, assertive, and character. We lose the figure that can be an example for young politicians, “he said.

Ace has his own memories with the late AM Fatwa. When he was a student of UIN Jakarta (formerly IAIN Jakarta) and led the 1998 Student Movement of UIN Ciputat, AM Fatwa always gave the spirit and motivation for the struggle to overthrow the New Order government solely for the improvement of the nation towards a democratic government.

Dr. A. Bakir Ihsan, Vice Dean for General Administration Faculty of Social and Political Sciences UIN Jakarta said that he began to know close to AM Fatwa after the deceased from the New Order arrest in 1993. From the reading and discussion directly, Bakir considers Fatwa as a persistent fighter figure. “May Allah make it easy for the way to heaven,” he concluded.

Among activists, Fatwa is known as a cross-regime critic. During the 1984 Tanjung Priok incident, AM Fatwa and the Petisi 50 working group tried to make the Lembaran Putih, an event that occurred on 12 September 1984 in Tanjung Priok. This sheet attempts to reveal the arbitrariness of the New Order government apparatus.

However, the initiative dragged him to justice. At the trial in Central Jakarta District Court, AM Fatwa was arrested and imprisoned for subversive allegations. He was accused of violating Law No. II / PNPS / 1963 for distorting, undermining and perverting the ideology of Pancasila or the direction of the state, destroying the legitimate government authority, or spreading a sense of division and hostility among the people.

In the environment of UIN Jakarta itself, Fatwa is a very familiar figure. Because, himself took education in IAIN Jakarta Faculty of Ushuluddin and Da’wah in the year (1960-1965). During his lecture, Fatwa was once believed to be the Chairman of the Student Senate of Ushuluddin / Da’wah and IAIN Syarif Hidayatullah Student Council Member Jakarta (1963-1964).

During his lifetime, the Fatwa pursued his career by first becoming the Imam of the Army, the Deputy Head of the Islamic Spiritual Service KKO-AL (Marines) Eastern Region Command in Surabaya, 1967-1970, Head of Sub Directorate of Community Development Directorate of Politics of DKI Jakarta / religious and political issues of Governor Ali Sadikin, 1970-1979.

Furthermore, since 1996-1998, Fatwa is believed to be Special Staff of Minister of Religion Tarmizi Taher. Not stopping there, the Fatwa strolled into senayan and was appointed Vice Chairman of the House of Representatives (DPR RI) period 1999-2004 before being trusted as Vice Chairman of MPR RI period 2004-2009.

After that, the Fatwa strolled into DPD RI Member representing DKI Jakarta period 2009-2014. Furthermore, he is believed to be Chairman of Honorary Board of DPD RI period 2012-2017.

Despite having appeared as a national figure, but the Fatwa is never separated from UIN Jakarta. Several times he came and attended in various academic forums and alumni of UIN Jakarta. In fact, he is willing to become Alumni Association Advisory Board UIN Syarif Hidayatullah Jakarta (IKALUIN). Not stopping there, Fatwa also participated in the rearrangement of assets management Ministry of Religious Affairs UIN Jakarta which is now controlled by a third party. (usa)