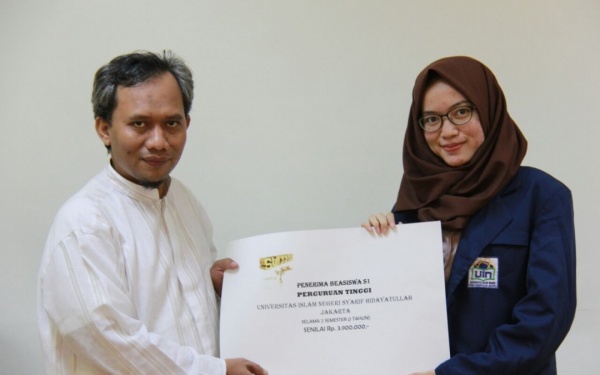 “The amount of aid funds varies between Rp 1 million to Rp 3 million. Depends on the condition of the recipient. There is a full from the first semester to finish, there are also only a few semesters, “said Director Kanzul Azkiya, Taslimun Dirjam, after providing scholarship assistance at Faculty of Technology and Sais and Technology (FST) UIN Jakarta, Wednesday (01/24/2018 ).

According to the man who is familiarly called Taslim, scholarship grants are given to the underprivileged students is a commitment. It is intended that students can continue education until completion and become a scholar. In addition to UIN Jakarta students, he continued, scholarships are also given to students from kindergarten to high school level as well as students studying at other universities.

Until the beginning of 2018, more than 20 participants who received scholarship Kanzul Azkiya education. The amount has not been added with other prospective participants who are waiting for the queue.

It is said that, according to Taslim, apart from the results of his efforts, scholarship fund for education is also obtained from other donators in the form of zakat.

Taslim itself began to cultivate the world of philanthropy since 2010 ago. This is done considering many students and students who need the cost of education to achieve their future.

“In the UIN Jakarta campus there are many students who are economically disadvantaged. Sometimes, their learning is disrupted because they have to help parents sell vegetables or because they do not have parents anymore, “he explained.

For Kanzul Azkiya institution, said Taslim, the requirements of prospective scholarship recipients are not necessarily smart or achievement academically. The most important principle is that they can’t afford the tuition and it won’t bother them from attending classes. (usa-rs)